« back to all blogs

An administrative adjustment is a process in which minor deviations from the City of Chicago Zoning Code may be allowed, depending on the issue.

According to the City’s website: “Administrative adjustments enable developments that are more in keeping with the established character of local neighborhoods, provide flexibility that will help promote rehabilitation and reuse of existing buildings, and provide limited flexibility for new construction to address unusual development conditions.”

A recent project in which a building permit was issued involved an administrative adjustment for side setbacks. The project was to add a second floor to an existing house on a 25 foot wide lot. As is common in the City, the north setback was only 6 inches from the property line. The south setback was 4 feet. Total side setbacks were supposed to be 5 feet (20%). Existing total side setbacks were 4 foot, 6 inches. So we applied for the building permit, knowing we would have to apply for an administrative adjustment for the two items. 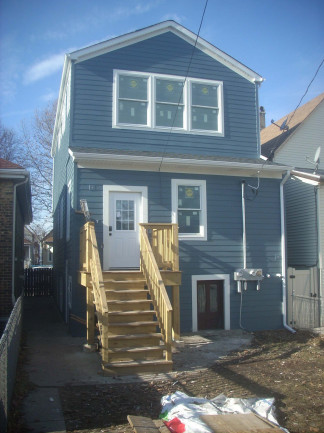 From the date we applied for the building permit, it took 35 days before the official denial letter was issued, after two rounds of zoning corrections. There happened to be a clerical error on the denial letter, so letters to neighbors had to be sent twice. The Administrative Adjustment process took 80 days, which is a bit longer than usual, but the Owner was able to build the amount of space they really wanted to,